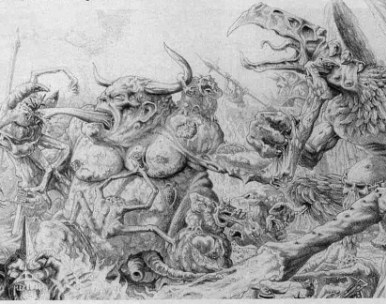 is a brief (and no doubt poisonous) taster from the second volume of Realm of Chaos: The Lost and The Damned, a much-sought after tome which concerned itself with the second pair of the great powers of Chaos: Tzeentch and Nurgle. Like all chaotic material of this period, it is illuminated (in the medieval sense) with Ian-Miller-penned borders, and is an early insight into the nature and demeanor of these servants of chaos: the Greater Daemons of Nurgle and Tzeentch, the Great Unclean One and the Lord of Change.

Anyone who has spent time with a band on tour knows that the foetid interior of a tour bus is definitely a place of worship for Nurgle.

Herein we shall mostly be concerned about the bilious comedic stylings of the Great Unclean one, also known as (among other things) Corrupters of Flesh and Wallowers in the Pit. Of his feathered and plumed rival, more may be written at another time…

These powerful daemons are slothful and indolent wallowers in morbidity, concerned only with the progress of their own personal cargo of infections and illnesses. Once roused, however, they are deadly opponents, despite the studied air of decay and misery that surrounds them. Although they have tremendous strength, whenever possible the Unclean Ones prefer spellcasting to the exertions and dangers of combat. They will, of course, fight if magic and escape are impossible.

Realm of Chaos: Lost and the Damned

Although accompanied by several artistic renderings, including the one pictured above, the images of a painted model is  tucked away underneath some Copplestone Commissars and an Bob Olley Ogre, somewhere around page 76.

The model was sculpted by one of the Putty-dabbling dioscuro of Marauder Miniatures, Aly Morrison, though not as a Marauder release. Of note are his spindly arms; clearly the limbs of a being which does not overly concern itself with being able to bench weights, which rather suits its slightly indolent nature, perhaps more so than the infected beefcake build of more recent iterations.

The original release was rapidly supplemented with options that made it essentially modular, allowing one to build several  without (ecstatic) duplication, so in the event that further spawn are required, and can be found at a fair price, they are unlikely to look the same.

This withered stichomancer recalls seeing arms, bellies and limbs cropping up in dozens of conversions through the years, including the arms on David Soper’s Golden Demon-winning 1990 Nurgle Predator.

For those who are interested, we found an interview with Mr Soper and a large set of multiple angle pictures here

Here’s a head, protruding from a similarly disgusting Predator from Golden Demon 1989

Henchman of Lothar Bubonicus, Grod is a fine example of how Nurgle can be friend to simple greenstuffing (or probably milliput in this timeframe.)

The belly with mouth appeared on the prow of another later edition Predator, a picture of which will be added as soon as this scribe can remember where he saw it. (It was the boxy one with all the rivets, like a 40k Cromwell. Same colour too.)

Created in Nurgle’s own image, a Great Unclean One is far taller than a man. It’s bloated body is riddled with pustules, and its head sits on multiple chins without any sign of a neck. The Unclean One’s sinewy arms reach to the ground, and its three-fingered, clawed hands are always filthy.

Realm of Chaos, Lost and the Damned

Large by the standards of his time, the lead Great Unclean One was always a little short, an image probably not helped by his inherent dumpiness, even before he was overwhelmed by more recent editions. This one has gained a few scale inches by dint of the nail at his core, over which the various segments were dropped. With his head affixed to a spike, the various rings were spread apart until they achieved a pleasing balance, and the resulting gaps filled with green stuff. Nurgle is always forgiving when it comes to DIY sculpting, so it was not difficult to roughen the filler up until it matched the putresence on the rest of the model. With an extra slottabase under his elephantine feet, and a smattering of nurglings (there are sixteen or so of them) to cover that up, he became somewhat more imposing. Also, whatever it is coming out of his mouth is matched by tentacles in the groundwork. The implications are pleasingly unpleasant.

An Unclean One’s skin is tinted various shades of green, yellow and brown, and is encrusted with slimy mucus. Often this hangs in gobbets and drops from the daemon whenever it moves its lumpen body. It’s horns and claws are of a sickly ivory hue.

Realm of Chaos: Lost and the Damned

The original paint job was spruced up with some washes and extra highlights, including a glaze of yellow ink over the demon to distinguish it from it’s tiny haemunculi friends.

Here he is in comparison to a modern follower of our favourite stinky uncle, the painting details of which are covered here

Whilst still a perfectly serviceable Greater Daemon for Oldhammer, or rotting beach ball of death for any other system, in more modern games he would probably serve adequately as some sort of chaos spawn. He seems of a size, and is substantially more thematic to his chosen deity than the generic variety of spawn model. He will be added to the slow agglomeration of Nurgly things, alongside the Champion.

2 thoughts on “Mortis Medium – The Greater Demon of Nurgle: Scraping the mould from White Dwarf 109” 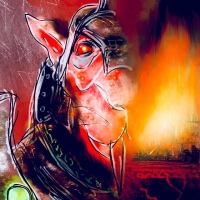 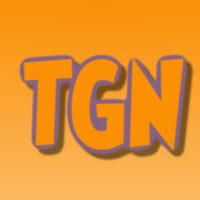 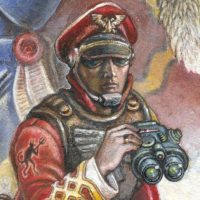